Now that we have stable caged populations of Culex mosquitoes and have worked out an egg laying on demand system the next incremental step is to separate the individual eggs from freshly laid egg rafts for microinjection.  (We have been advised that injecting them while together in an egg raft does not work well because of the pressure they put on each other during injections...)  Jolene worked out the timing to get fresh rafts, disassociated them, and lined them up on wet blotting paper (to keep them from drying out) on a microscope slide. 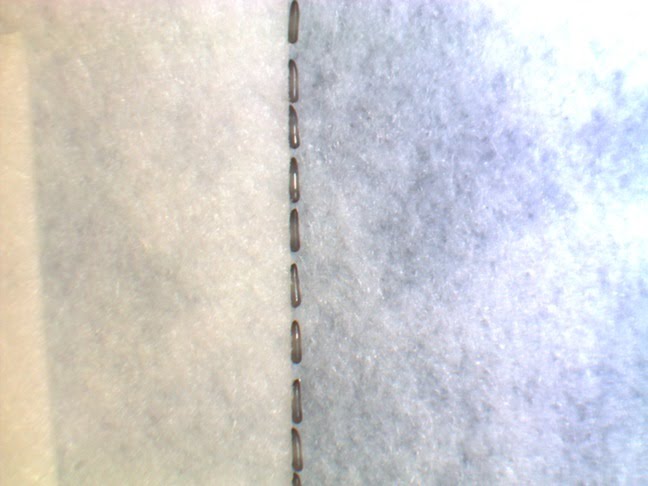 To the immediate left of the eggs is an extra layer of paper to brace them for injection from the right.  They were very light in color at first but they got darker (and harden) quickly by the time the picture was taken.  She put this first set back into water to see if manipulating them affects survival.  (For more photos and news check out Jolene's research blog.)

In other related news, we have some of the plasmids we need cloned and I am working on cloning the last one this week (that contain the genetic modifications for injection), and my plasmid preps are working!  Fingers crossed, with any luck we can try serious microinjection to generate germ line Culex transformations three weeks from now during the next round of fresh egg production.  We are planning to generate the self docking system described (in Anopheles gambiae) by Meredith et al. 2013 in Culex.

It is no coincidence that my last post was in August.  Once classes started up I have had a very busy schedule and little time for anything else.

However, the thing that triggered this post is, I happened across an article that discussed one of our recent publications.  It is on the IGTRCN (insect genetic technology research coordination network) website in an article by Frank Crisione "Transgenic Underdominance: Pushing Transgenes into Populations".  It is good to know that people out there are reading our publications.

In a similar vein, a grad student here at UH in another lab (I am on his graduate committee) just published a nice article about his work for the general public, "Can a small fish answer the big question?" by Kirill Vinnikov.