In the earlier post about a simple model of reversible mutations I used a discrete time approach.  Events happened in defined time-step generations.  We ended up with something that looked like this to describe the change in frequency over time measured in generations,

I will leave the details in the earlier post. However, I want to mention that

are mutation rates and I have put a

function here to represent the part of the equation that approaches

, the equilibrium frequency, as the number of generations,

, get large.  Also, we ended up with a difference in allele frequency, when starting at the extremes,

My point being that

In the Jukes-Cantor model we used a continuous time approximation to be able to use the Poisson distribution.  So, for example, we had the probability of no mutations occurring along the lineage from an ancestor equal to:

On the surface these look very different but lets change some things around.

.  In the simple reversible model we kept track of two mutation rates at rates of

If we used the form of the reversible model, but used four equal mutation rates, we would have something like:

This is the frequency of the allele that either has not mutated (or has mutated back from another form, which is wrapped up in

Let's plot together the probability the allele has not mutated for each model:

(with a mutation rate of 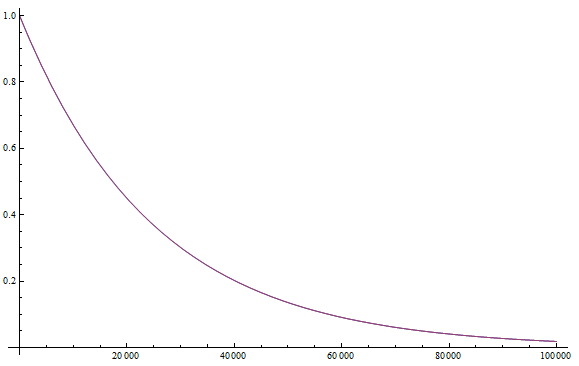 There are two curves plotted, but they are almost exactly overlaid with one another.  Here is a plot of the difference in the two curves: 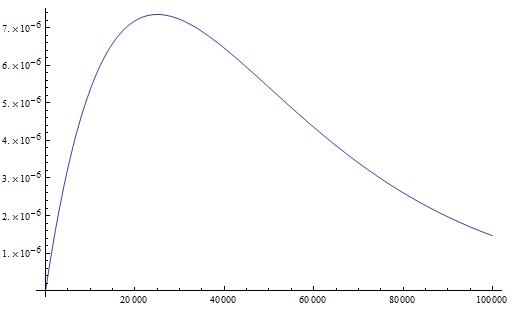 Notice the scale of the y-axis, frequency differences in the millionths.  Also, as the number of generations gets very large the difference approaches zero.  This indicates the difference in continuous time and discrete time assumptions, which disappears as the individual time intervals become relatively small.  Also,

In fact, this is one way

can be defined as one approaches a limit from discrete time to continuous time.  For example see the description of

and (continuously) compounded interest.  As an investment is compounded at smaller and smaller time intervals, the effect of repeatedly compounding increases the final amount but at a diminishing rate because the time to gain interest between compounding events is over smaller and smaller units of time.  At the limit of continuous time with infinitely small time steps 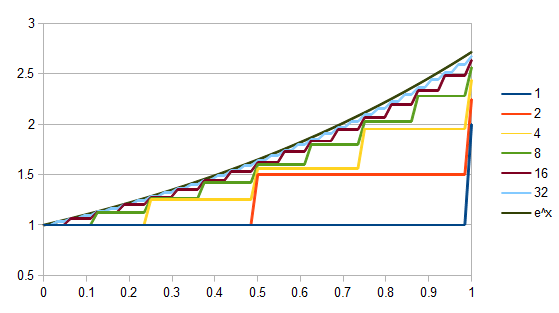 In the graph above time is on the x-axis.  The initial value is compounded at the same rate but over smaller units of time (the inverse of 1, 2, 4, ...).  The curve at the limit follows

The results of the earlier mutation models can be revisited knowing this.

The first model of irreversible mutations:

can be written in a continuous time approximation as:

And the reversible mutation model:

can be written as:

Also, the maximum difference in allele frequencies in the reversible model becomes