Towards the end of the semester I asked my students for their recommendation on extra credit reading assignments next year.  Here is a plot of their response with books that were suggested by two or more students (single entries, which were slightly more than a quarter of the total response, are grouped together). 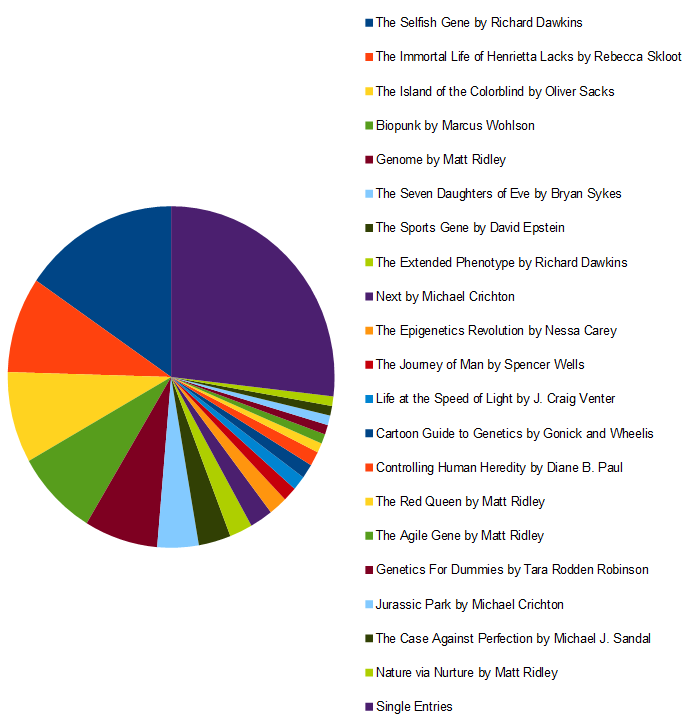 The large number of students that recommended The Selfish Gene by Dawkins surprised me.  Actually it makes me a bit suspicious that they are already reading this for another class...  The four next most popular books are ones that were options this year, so I suspect they are a bit inflated, but are still good books that are relevant to genetics.  Controlling Human Heredity by Paul is also one that was among the options this year but it was not recommended as highly--it was dry and less enjoyable to read, but I still think it is an important book for them to be exposed to (the history of eugenics programs in the United States).  Still, the students have helped me identify several books that I can take a closer look at for reading options in class next year.

Here are some of the single entry student recommendations that caught my attention (this is not an endorsement for or against):

Lords Of The Harvest: Biotech, Big Money, And The Future Of Food by Daniel Charles

Genetic Witness: Science, Law, and Controversy in the Making of DNA Profiling  by Jay Aronson

Deep Ancestry: Inside the Genographic Project by T. Spencer Wells

Deep Ancestry: Inside the Genographic Project by Spencer Wells

Banana: The Fate of the Fruit That Changed the World by Dan Koeppel

The Red Queen: Sex and the Evolution of Human Nature by Matt Ridley

Power, Sex, Suicide: Mitochondria and the Meaning of Life by Nick Lane

Why We Get Sick: The New Science of Darwinian Medicine by Randolph M. Nesse and George C. Williams

Incognito: The Secret Lives of the Brain by David Eagleman

The Demon-Haunted World: Science as a Candle in the Dark by Carl Sagan and Ann Druyan

Mutants: On Genetic Variety and the Human Body by Armand Marie Leroi

Survival of the Sickest: The Surprising Connections Between Disease and Longevity by Sharon Moalem and Jonathan Prince

Invasion of the Genes: Genetic Heritage of India by B. S. Ahloowalia

The Violinist's Thumb: And Other Lost Tales of Love, War, and Genius, as Written by Our Genetic Code by Sam Kean

Endless Forms Most Beautiful: The New Science of Evo Devo by Sean B. Carroll

War Against the Weak: Eugenics and America's Campaign to Create a Master Race by Edwin Black

The Making of the Fittest: DNA and the Ultimate Forensic Record of Evolution by Sean B. Carroll

The Genetics Revolution: History, Fears, and Future of a Life-Altering Science by Rose Morgan

The Philadelphia Chromosome: A Mutant Gene and the Quest to Cure Cancer at the Genetic Level by Jessica Wapner and Robert A. Weinberg

The Emperor of All Maladies: A Biography of Cancer by Siddhartha Mukherjee

The Ethics of Genetic Engineering by Roberta M. Berry

Is It in Your Genes?: The Influence of Genes on Common Disorders and Diseases that Affect You and Your Family... by Philip R. Reilly

The Mismeasure of Man by Stephen Jay Gould

Abraham Lincoln's DNA and Other Adventures in Genetics by Philip R. Reilly

Final grades for the semester were due on Christmas Eve the 24th, and I had students calling me on my office phone and emailing me to ask about their grades up until the last minute on the afternoon of the 24th.  Then I was looking forward to a much needed break and went fishing with a video camera.  I'll try adding one of the videos here. It is down-sampled a bit to reduce the file size online.  This is a video of a Mokuleia tidepool on O'ahu.

You can clearly see three (?) fish species.  I am not a marine biologist (this is also part of a personal project on my part to learn more about marine natural history here in Hawai'i), so be suspicious of my attempts at identification.  I am fairly certain that two of the species are sharnosed mullets (Neomyxus leuciscus, uouoa in Hawaiian)--the larger long ones--and (juvenile) 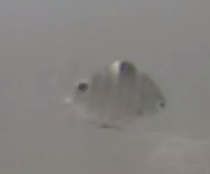 I suspect that flagtails are also present (Kuhlia spp., ʻāholehole) and the most common in this video, but I am less confident about their identification (see the update below, these are actually reticulated flagtails, Kuhlia sandvicensis).  There are also two brief glimpses of a third species that I suspect is a "rockskipper" zebra blenny.

If this works well then I will try uploading some more videos.

I sent a picture of the flagtail from the video to some of my coworkers to ask about its identification. 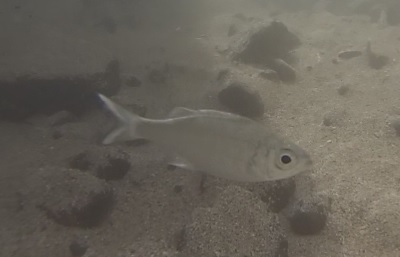 Hi Floyd.
This looks more like the reticulated flagtail, Kuhlia sandvicensis (also referred to as aholehole). It has a broader distribution than K. xenura, the latter of which is an endemic. Distinguishing features include a pale gray rather than dark grey tail, sometimes with a pale margin (which shows up in your picture), and a flattish, rather than slightly concave, head profile. The eye tends to be smaller in sandvicensis, but that doesn't help much unless you have the two species side by side.
Juveniles of both species are found in shallow coastal waters and tide pools so are easy to encounter.
Kassi

I also came across an article about the flagtails in Hawai'i that discusses some of the difficulties and confusion in distinguishing between them.