is a common summary of how similar populations are on a genetic level and it is based on the concept of "missing heterozygosity". I was thinking of a way to illustrate the multinomial with the probabilities of genotypes under Hardy-Weinberg assumptions, an allele frequency,

, and the degree of missing heterozygosity,

Here is a small dataset to work with, counts of three genotypes of a SNP with two allelic states in a sample of 30 individuals.

We can go back to the binomial for a moment and estimate the allele frequency. If we ignore genotype (the association between alleles), there are 18 A's and 42 T's.

So 30% of the alleles are A alleles. With the binomial, the probability of the data

given an allele frequency

is the number of A alleles and

is the number of T alleles.

Plot this in R to visualize the probability of the data given the range of possible allele frequencies. 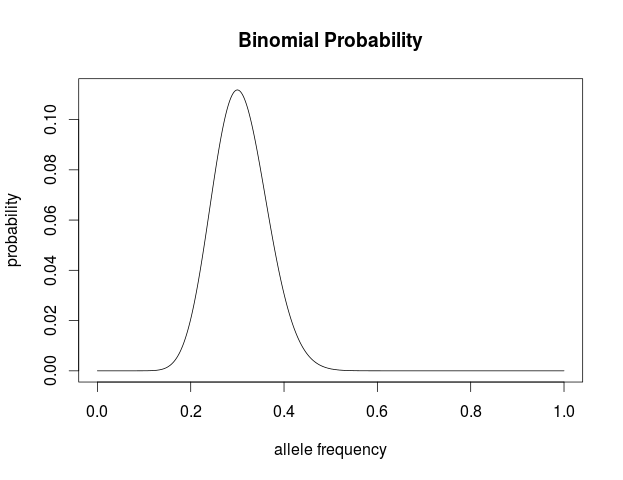 , setting it equal to zero, and solving for

. First of all the binomial coefficient in the front is a constant so we can remove that for simplicity.

as the sum of

This makes intuitive sense. The best guess for the allele frequency is the number of times it is observed out of the total.

We can also integrate to get the area under the curve. The indefinite integral is

is the ordinary hypergeometric function. First this has to be evaluated at

to put it on a scale where the area under the curve sums to one. For

this comes out to

at the maximum likelihood point,

, gives a cumulative probability of 0.4703, which is not far from 0.5, the median of the distribution. You can evaluate it online with this link to Wolfram Alpha:

for example gives a cumulative probability of 0.9991; so, more than 99% of the curve is below this point and we can say that

is significantly less than

Okay, that was a warm up; now let's do this with the genotypes before adding in

Going back to the original genotype dataset of 30 individuals.

The multinomial probability is

are the counts of each genotype in the sample and

is still the frequency of allele "A."

We can plot this along with the binomial curve for comparison with the following Mathematica code.

The curves are similar, they peak in the same place, but overall the multinomial curve has a lower probability than the binomial. This is because there is more information in the multinomial. Each set of the data for the binomial (allele counts) can correspond to a range of ways to divide the data into genotype counts. We can always reduce genotypes to number of alleles but we cannot do the reverse. So, a particular genotype outcome is less likely (a smaller part of all possible outcomes) than the corresponding allele count outcome.

Okay, now it gets a little more fun. We have a probability over a dimension of allele frequency of

from zero to one. Let's add another dimension of

but first let's think about what

This can be incorporated into the individual genotype probability components of the multinomial.

from zero to one and

from zero to one. 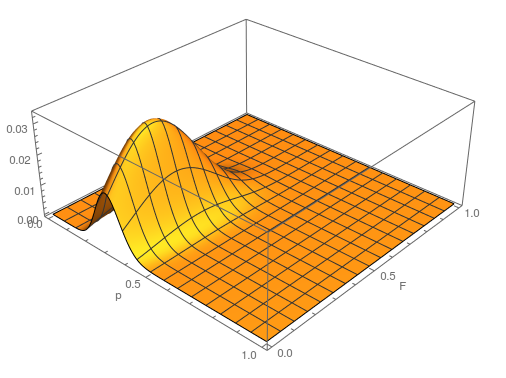 Here is the mathematica code used to make the plot.

corresponds to the multinomial curve above (in the plot comparing it to the binomial). We can also see that allowing positive values for

can result in higher likelihoods of the data. What do we actually expect

to be? The number of heterozygotes are 10 out of a sample of 30 genotypes, so the fraction of heterozygous genotypes is 0.333. The allele frequency is 0.3, so we expect

of the sample to be heterozygous. There is a

proportion of heterozygotes that are missing. This is

of the heterozygosity expected. So our point estimate of

is 0.207, or about 21% of the heterozygosity is missing. This appears to correspond to the top of the likelihood peak. Finally, notice that the peak is narrower in the

dimension than in the

dimension. There is more information in the dataset about the allele frequency than there is about the genotype frequencies. There is a larger sample, 60, of alleles than there are of genotypes, 30. So, the estimate of

is more refined than the estimate of

The range of zero to one makes sense for

. An allele frequency cannot be less than zero or greater than 1. Also,

cannot be more than one (all of the expected heterozygosity is missing), but it can be less than zero (negative

means there is an excess of heterozygosity). It looks like a large volume of the likely values of

given the data correspond to a negative

is not significantly greater than zero (Hardy-Weinberg expectations) for this dataset. Let's extend the plot to encompass a range of negative values for 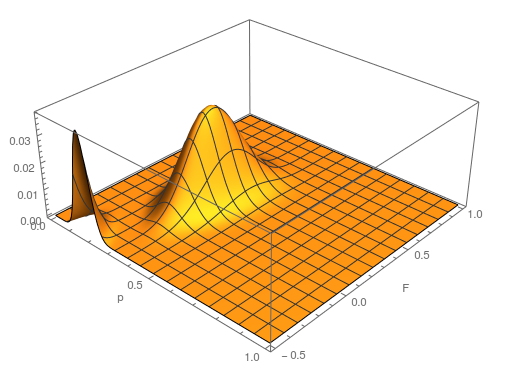 ...and something weird happened. There is a second likelihood peak with different values of

that actually has an even higher likelihood at its peak, but the parameter values are unreasonable (given what we can see in the dataset about the allele frequency and level of heterozygosity). The minimum possible 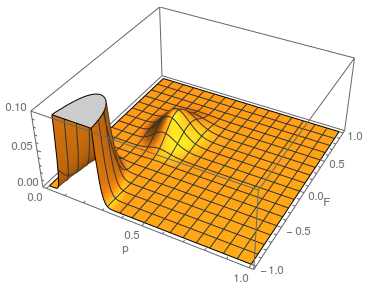 Long story short it turns out that this is an artifact... If you closely inspect what is going on by spot checking a few points in the second peak you find that the expected number of the rarer homozygote is negative, which is impossible, and in the likelihood calculation this is raised to the fourth power, which makes it positive, etc. This is a good example of how unanticipated, and initially cryptic, errors can creep into a computational script. This is fixed by setting up an if statement to only evaluate the likelihood if the expected number of homozygotes are positive; otherwise the likelihood is zero, which is true. Here is the updated script and a plot. 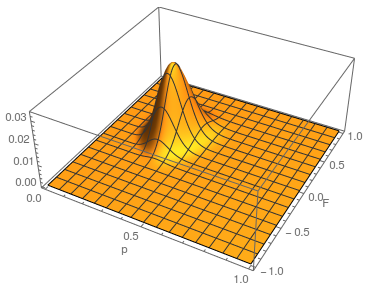 as a reasonable approximation of the (contour) likelihood surface of

in order to evaluate the range of possible parameter values. 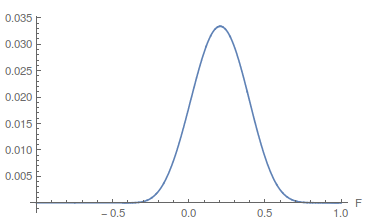 This is not yet

. We have been evaluating the missing heterozygosity of a single population sample. Heterozygosity can be reduced within a population by inbreeding effects where individuals do not mate randomly but tend to mate more often with closer relatives (selfing in plants is an extreme example). What was calculated above is

Let's say we had another sample from a different population. So now we have our original population one

Plotting the likelihood surfaces together. 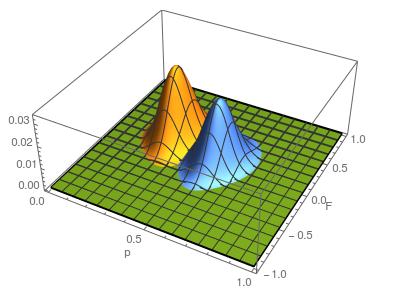 closer to zero (however, the two ranges of likely

values overlap and might not be considered significantly different). The second allele frequency is

. With the two allele frequencies we can now calculate a point estimate of

between the population samples. The expected heterozygosity in sample 2 is

. We already showed above that

. The average allele frequency over both populations is

and the average subpopulation expected heterozygosity is

. In a combined total sample, if there were population structure, the expected heterozygosity is 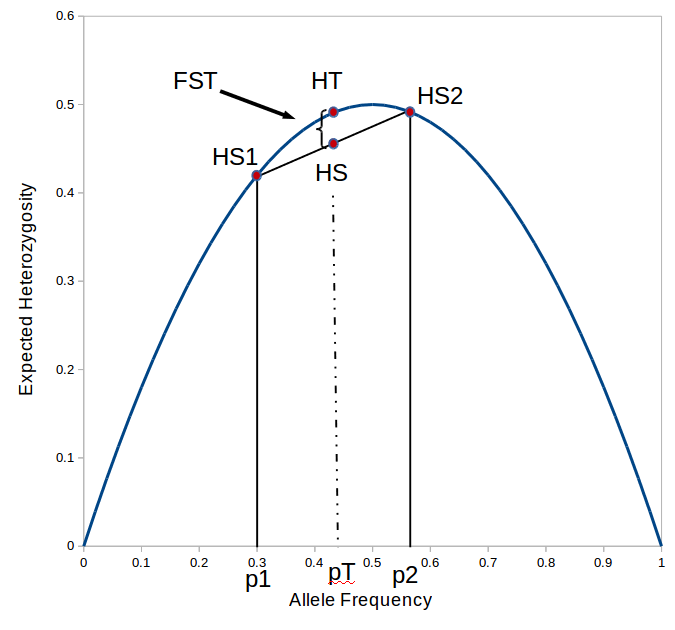 is the gap between

Before bringing this back together I need to introduce one more

-statistic. This one is

. It is the total missing heterozygosity due to both population structure and inbreeding effects. If we combine the two samples we get

40%. We expect a heterozygosity of 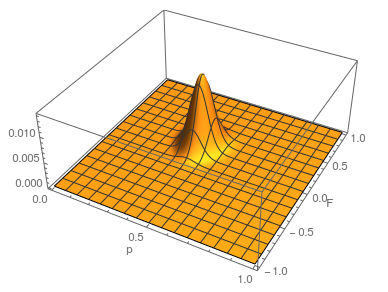 between populations is related to

. If we know the latter two we can estimate the former.

and let's say an

using the multinomial, which means we can also estimate

. This is starting to get more complicated with lots of parameters to estimate from the data, two allele frequencies and two

statistics (if we have a single

over both populations, which seems biologically reasonable) or four parameters in total. A good way to explore higher dimensional parameter space is to use a Markov Chain in a Monte Carlo fashion (MCMC) with Metropolis-Hastings algorithm. I save the details of this method for a later post. For now let's write a "hill climbing" Monte Carlo script (Monte Carlo refers to guessing parameter values and hill climbing means that it moves to values that produce higher probabilities of the data). Here it is in R.

Okay, that's going to have to be it for this post. This could be extended to cases where the sample sizes are unequal, multiple loci (

is shared across loci but

, but I'll have to save that for later.