We've taken another big step forward recently.  We are now microinjecting Culex mosquito embryos with genetically modified transposable elements that can potentially integrate into their genome.  We are starting with a test system to save time.  I cloned, grew, and isolated two plasmids (kind of like small artificial chromosomes) in E. coli bacteria that have a piggyBac transposable element system (originally from a species of moth, Trichoplusia ni).  One plasmid (the "helper" plasmid) is immobilized but produces the transposase enzyme that can integrate DNA into the genome.  The other "donor" plasmid is mobile with flanking piggyBac sequences but does not produce its own transposase (Wimmer 2003).  Instead it contains GFP (green fluorescent protein, originally from Aequorea victoria jellyfish) under an artificial 3xP3 "eyeless" promoter that should express in the eyes (which may be occluded by pigments) and larval optic nerve (Sheng et al. 1997; Berghammer et al. 1999).  Here is an image of the two isolated plasmids run on a gel. 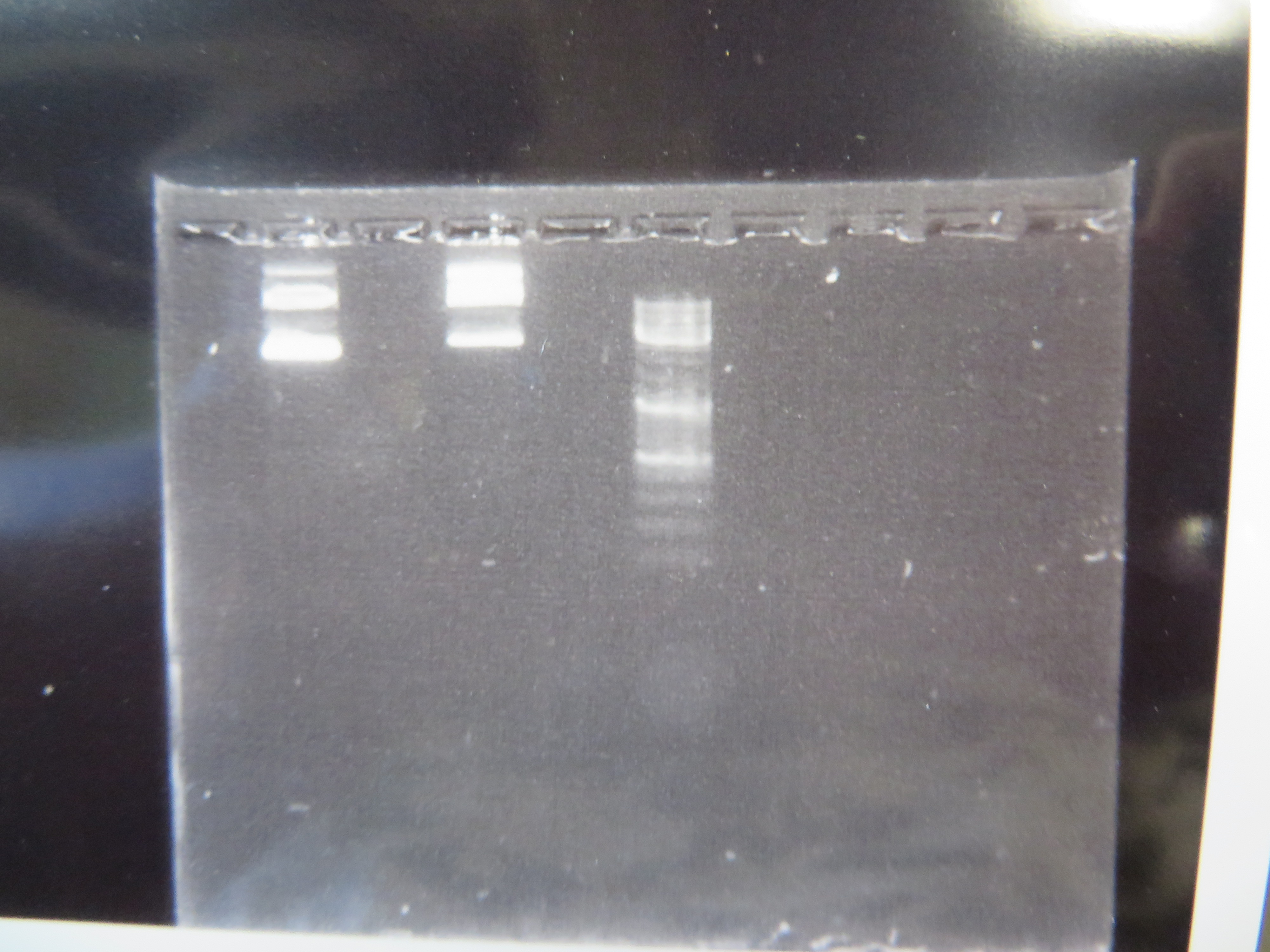 The first two lanes to the left show the plasmids and the third lane is a "ladder" to measure sizes.  The lowest band is a supercoiled plasmid.  The higher bands are plasmids that have single strand or double strand breaks in the DNA sequence (and so are less compacted and run slower through the gel).

We loaded the plasmids in the microinjection needle and injected newly laid eggs.  This was a trial run to get the system worked out (injection pressure, egg age timing, slide set up, etc.).  Some of the mosquitoes survived the procedure and were large enough for us to take a good look at them this week under the microscope.  We don't really expect this first batch to contain any genetically modified individuals, although it is possible.  However, even if some cells contained insertions the individual would be a genetic mosaic and may not be transformed in the germ line.  The next generation offspring are the real test.  At this point we are establishing more of a baseline of what the larvae look like.

First of all, here is a larvae under normal light. 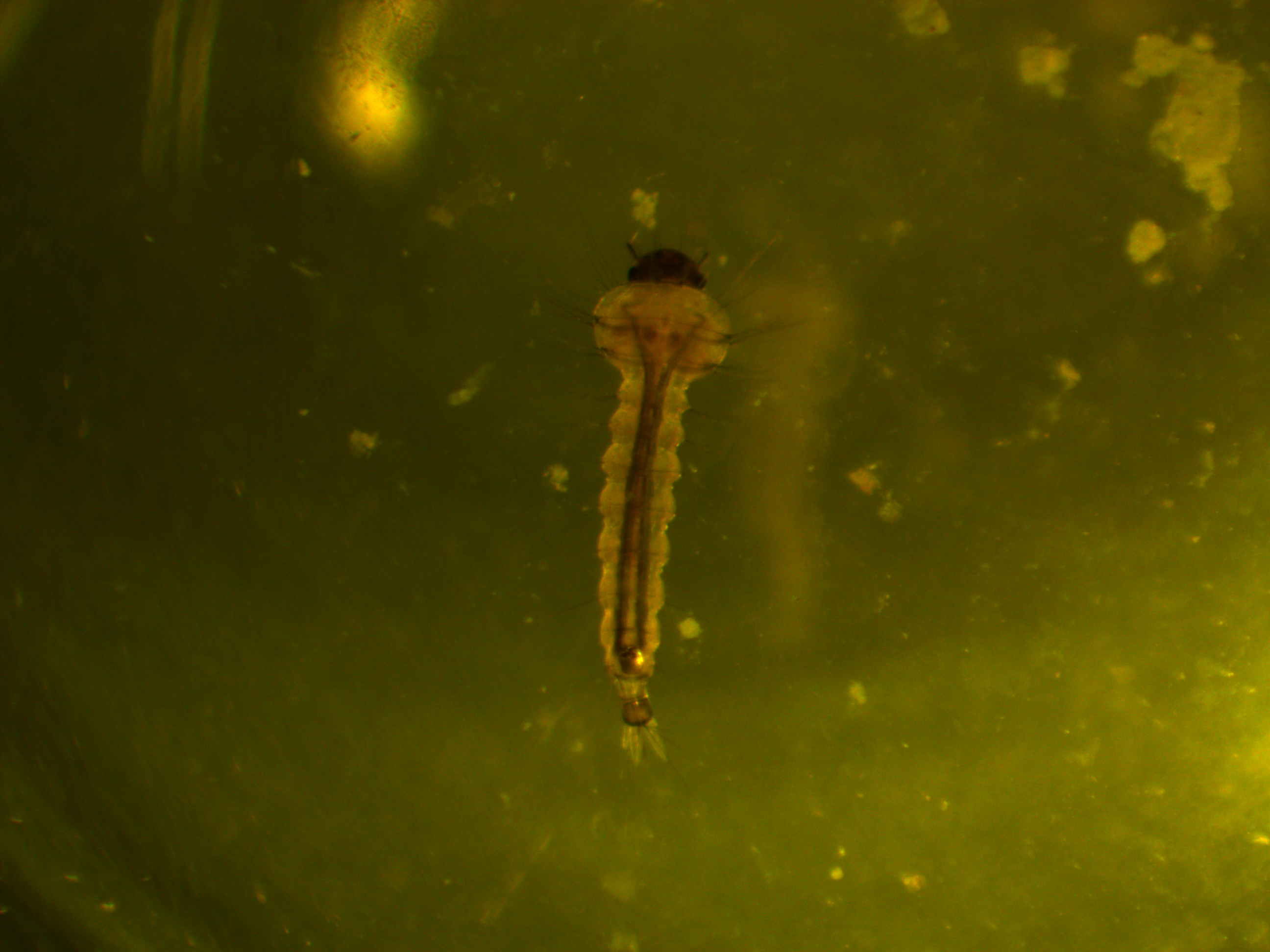 We are interested in the pattern of fluorescence under higher energy / bluer light.  This is what they look like in that case. 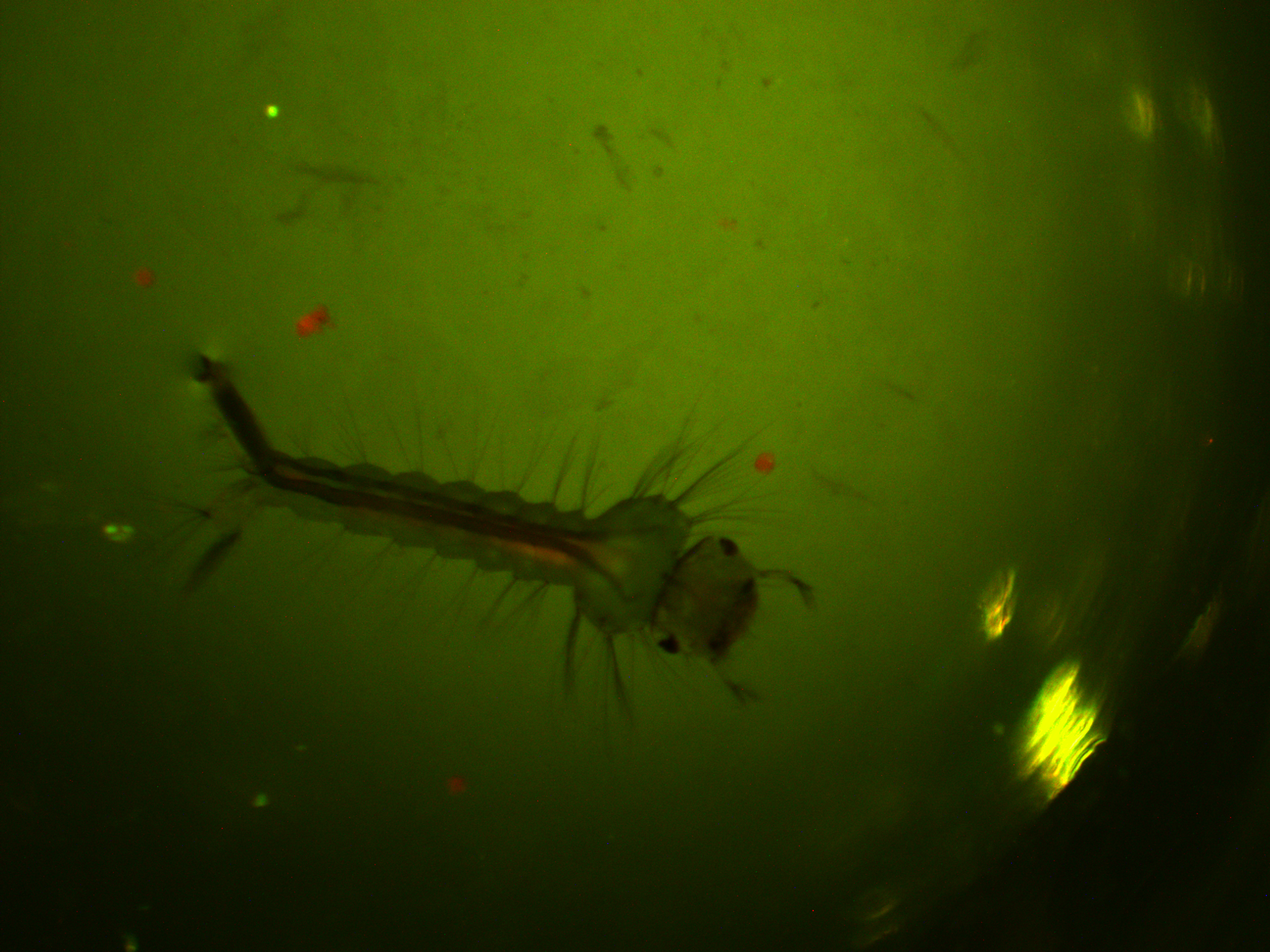 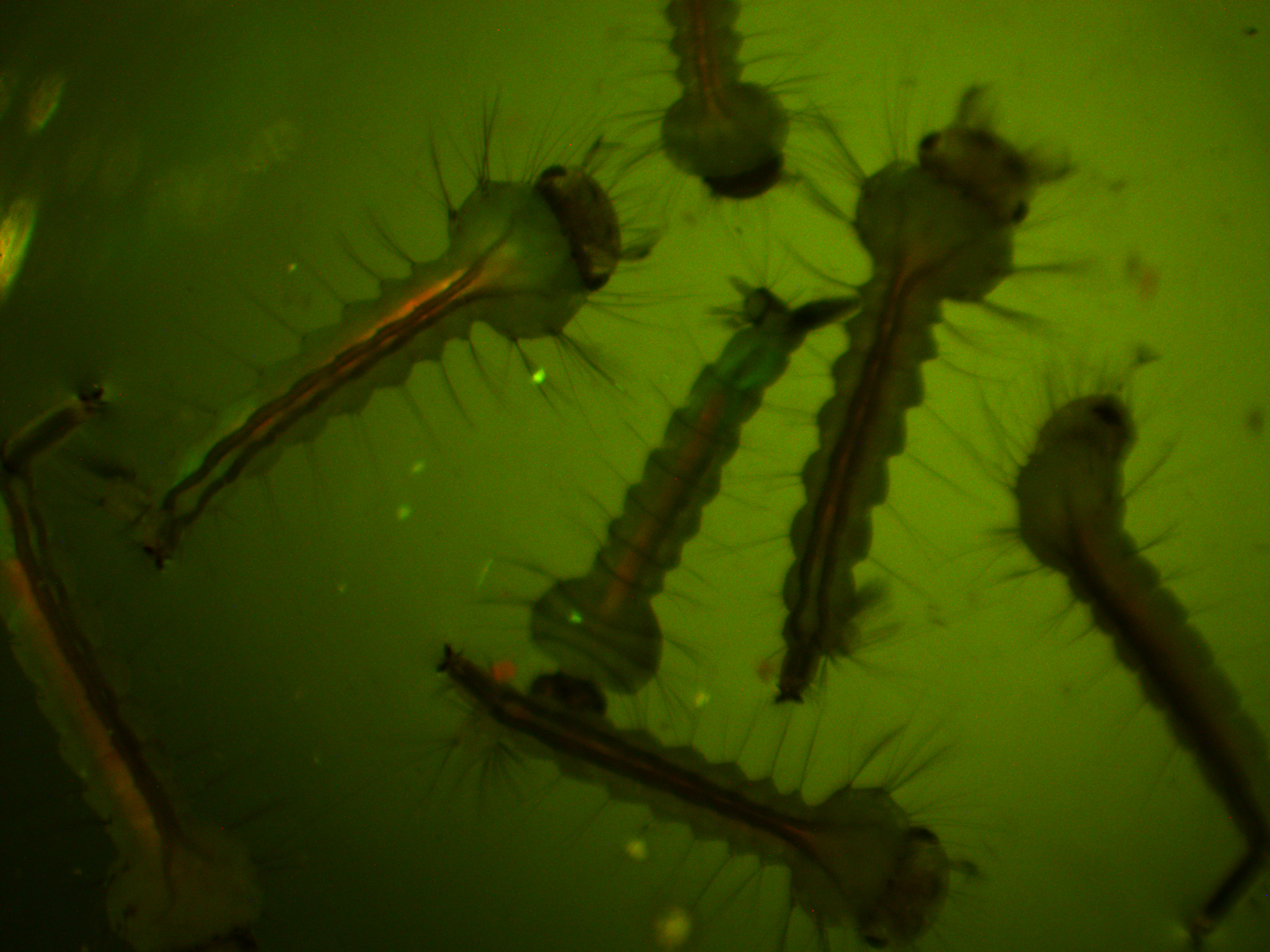 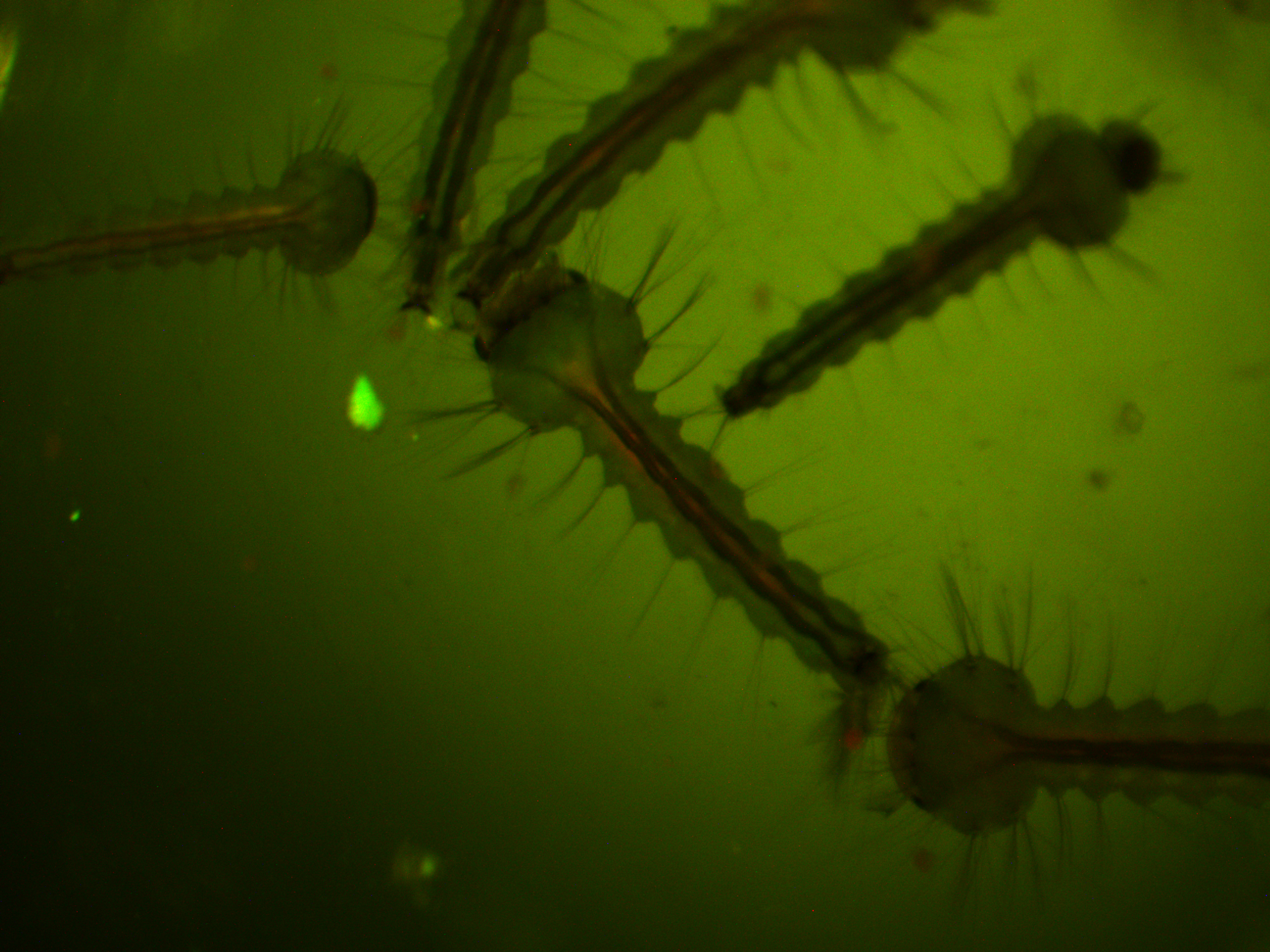 You can see some red and green autofluorescence.  Part of this probably results from the food we give the larvae which shows up as flecks of green and red in the water---the reason to establish this kind of baseline.  Here is the type of pattern (from another mosquito species) behind the eyes (green lines) that we would expect with a 3xP3-EGFP transformation: 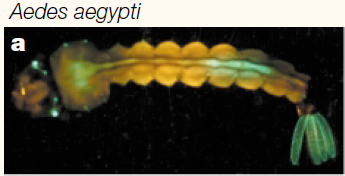 In the following images I turned up the regular light a bit so that they are under both light sources. 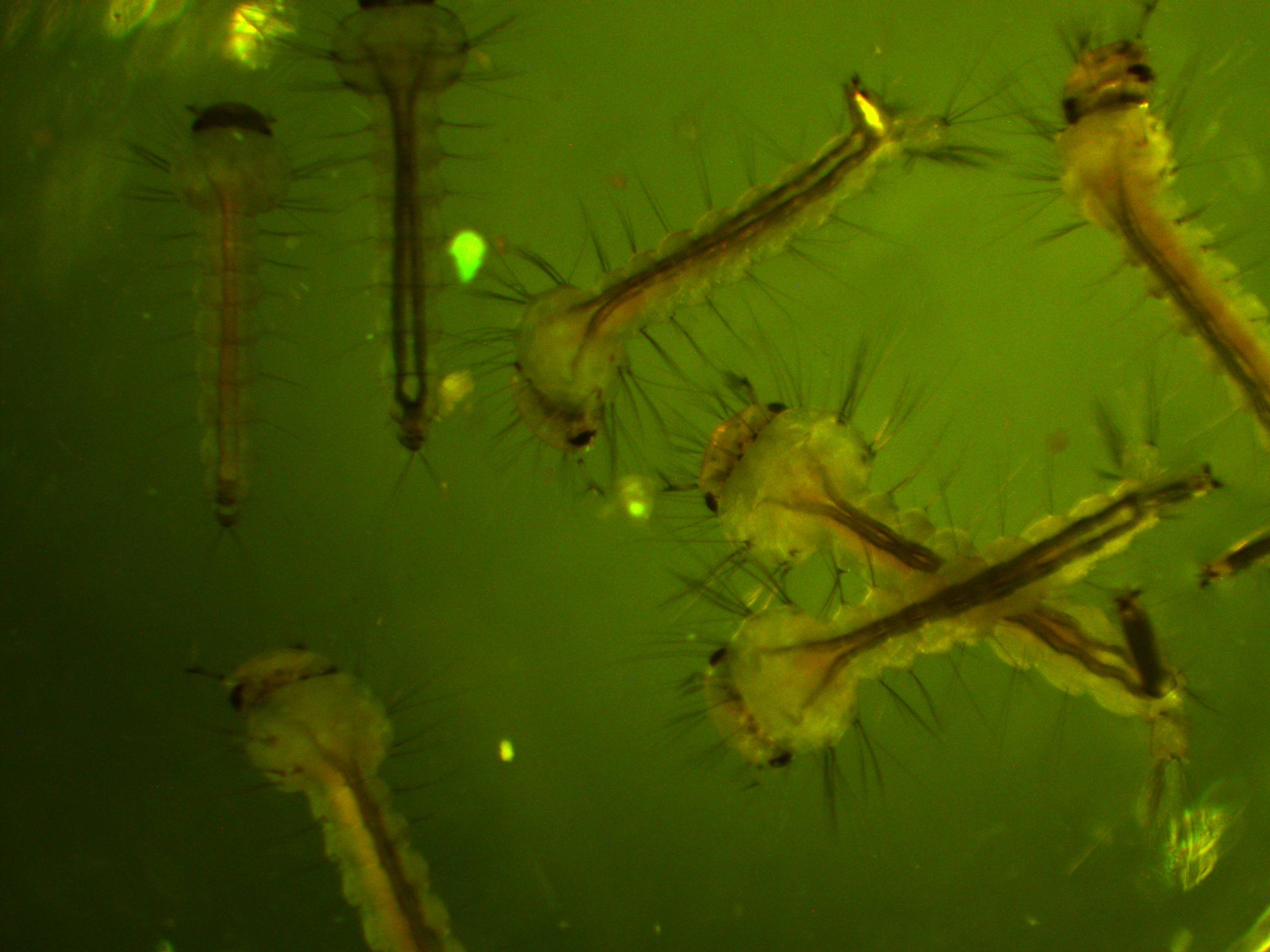 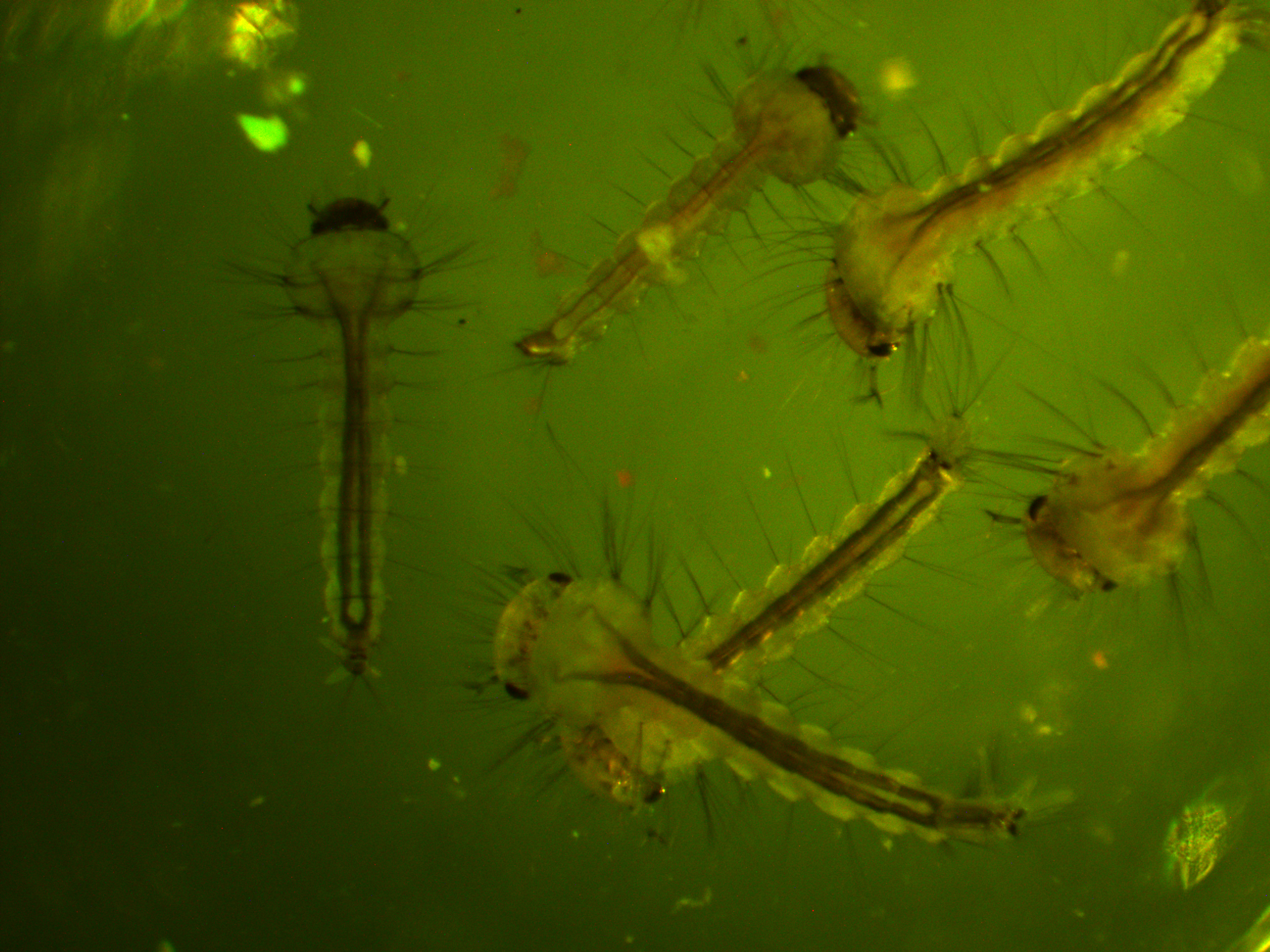 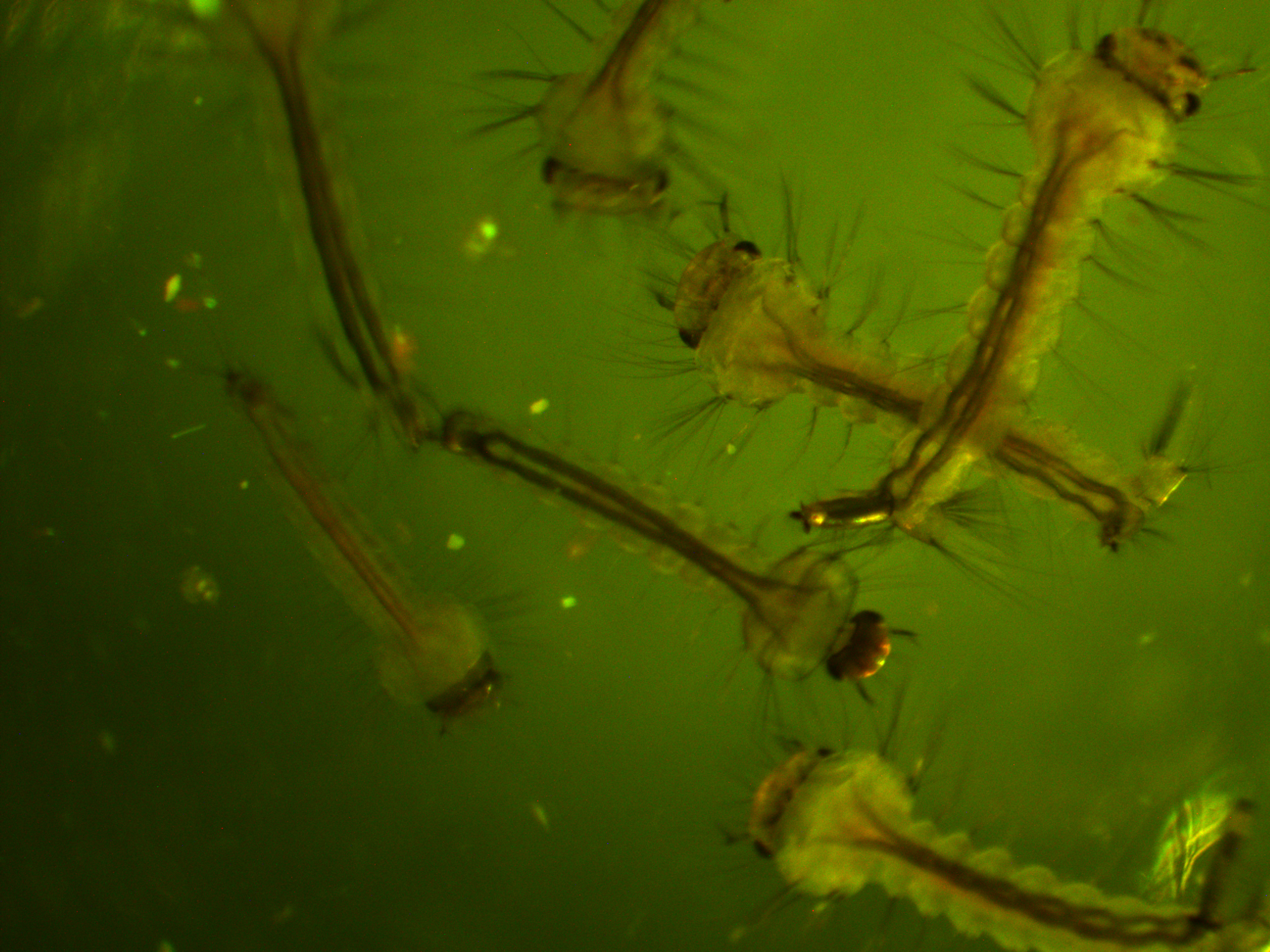 We will let you know how the next generation turns out...