A camera that fits into the eyepiece of our microscope arrived this afternoon (MiniVID USB by LW Scientific) and I couldn't wait to try it out.  Here are the first pictures I captured with it.  These are "raw" without any balance adjustments to color, brightness, etc. 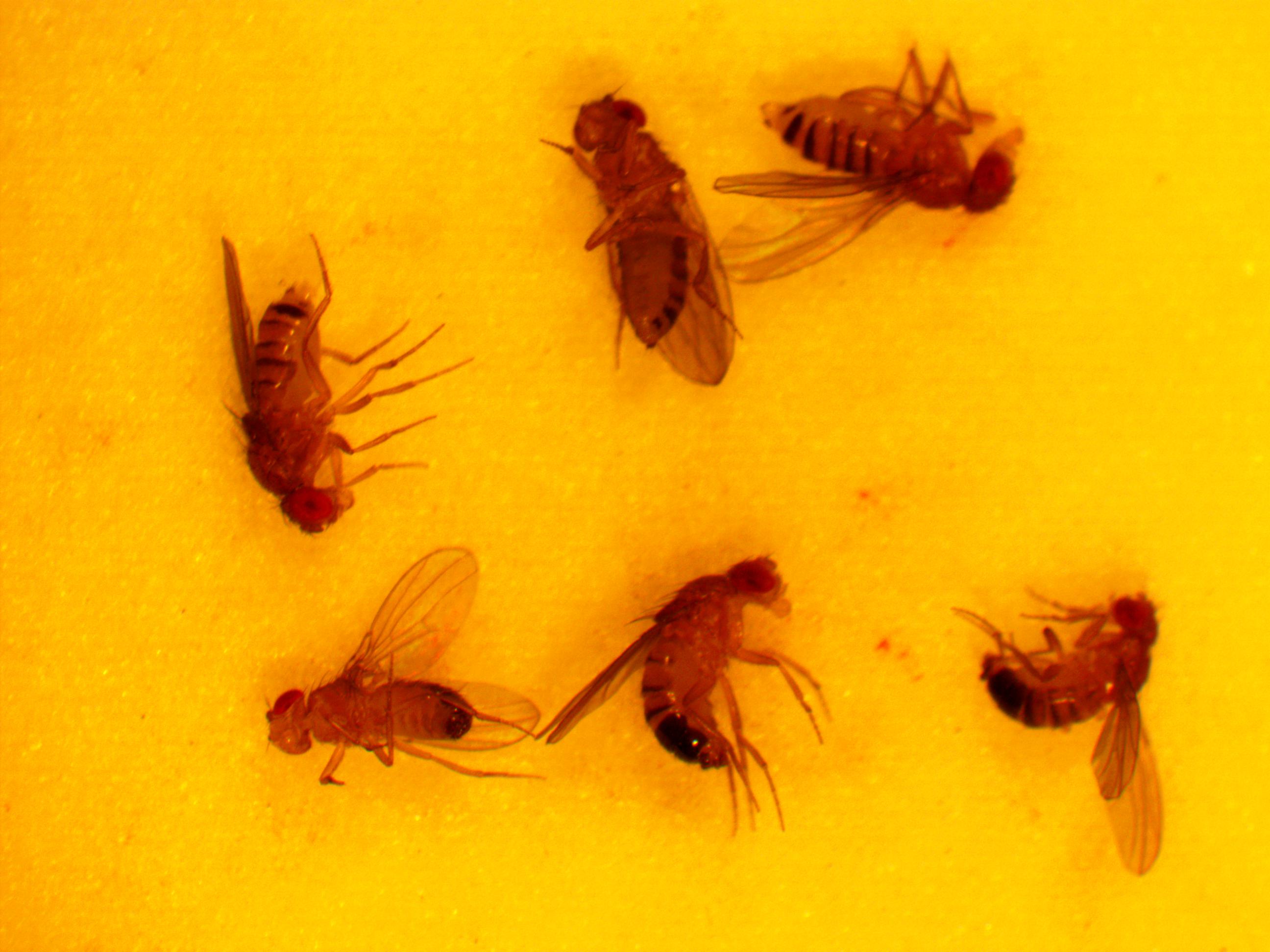 In the image above six fruit flies are knocked out with carbon dioxide.  We move them around with paint brushes.  I've arranged three females along the top and three males below.  The females tend to be slightly larger in body size and the males have darkly pigmented ends of their abdomens.  The relative size and pigmentation can vary between strains however so the best way to tell the difference is at the end point of the abdomen, simply put, males are rough and bumpy and females have a sharp point. 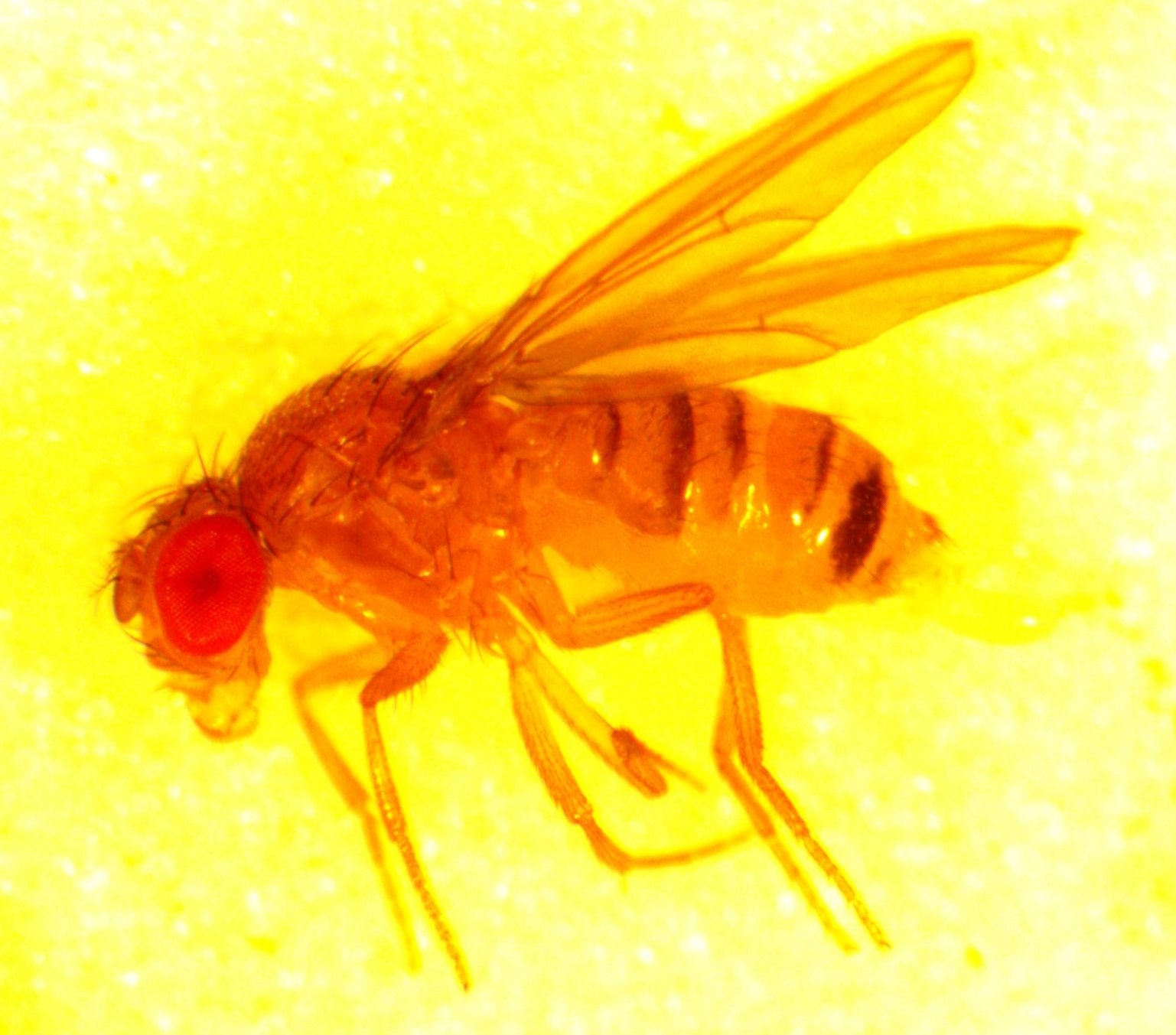 And here (above) is a close up of a female.  You can see the bristles on the body and wing veins.  Right behind the base of the wing is something like a "ball on a stick" called the haltere.  I've circled it in the copy below. 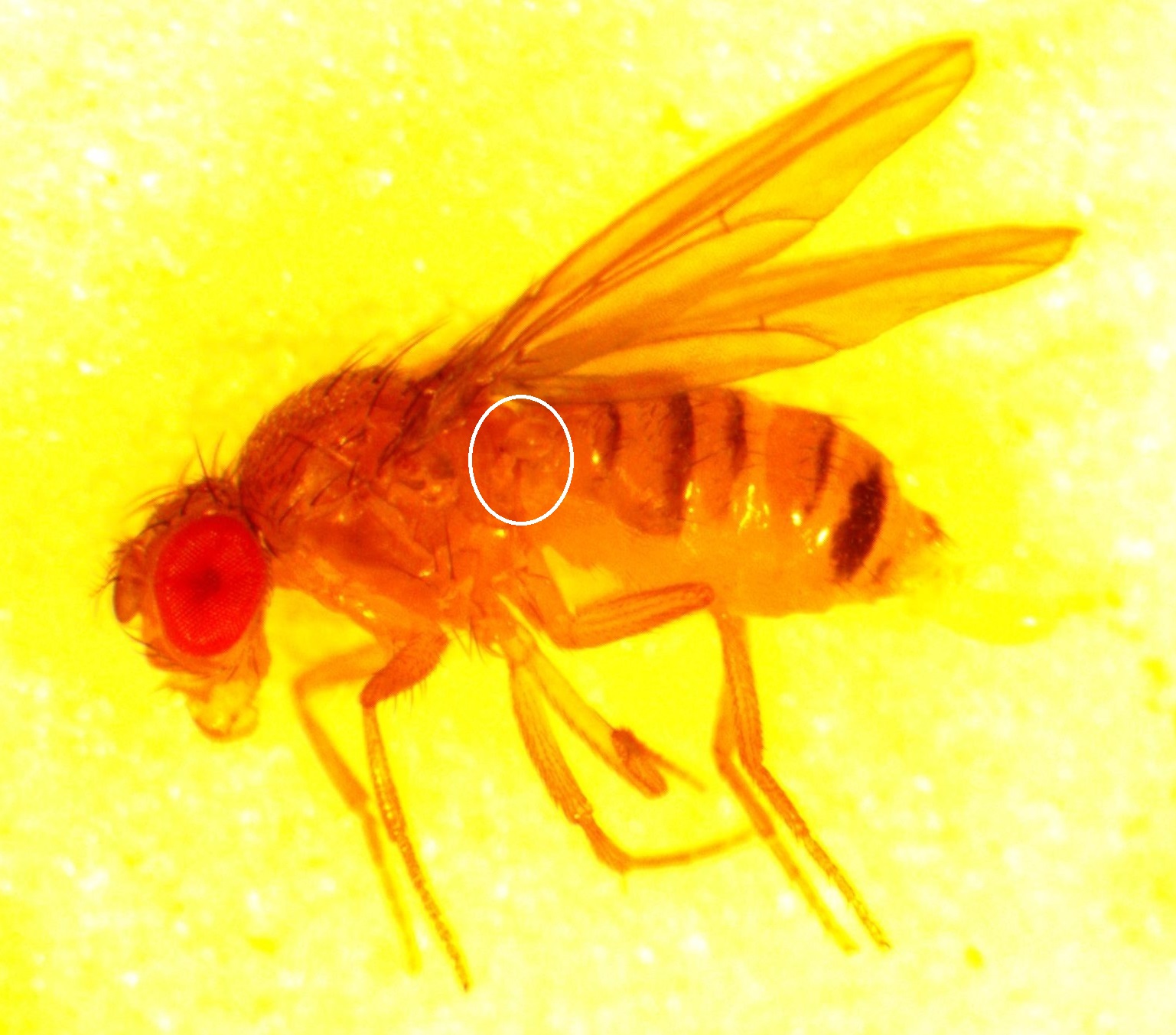 The halteres vibrate in a plane when the fly is flying and act like a type of gyroscope to maintain orientation.  (Also, incidentally, this effect is not unrelated to Foucault's pendulum which remains swinging in a plane as the earth rotates beneath it.) 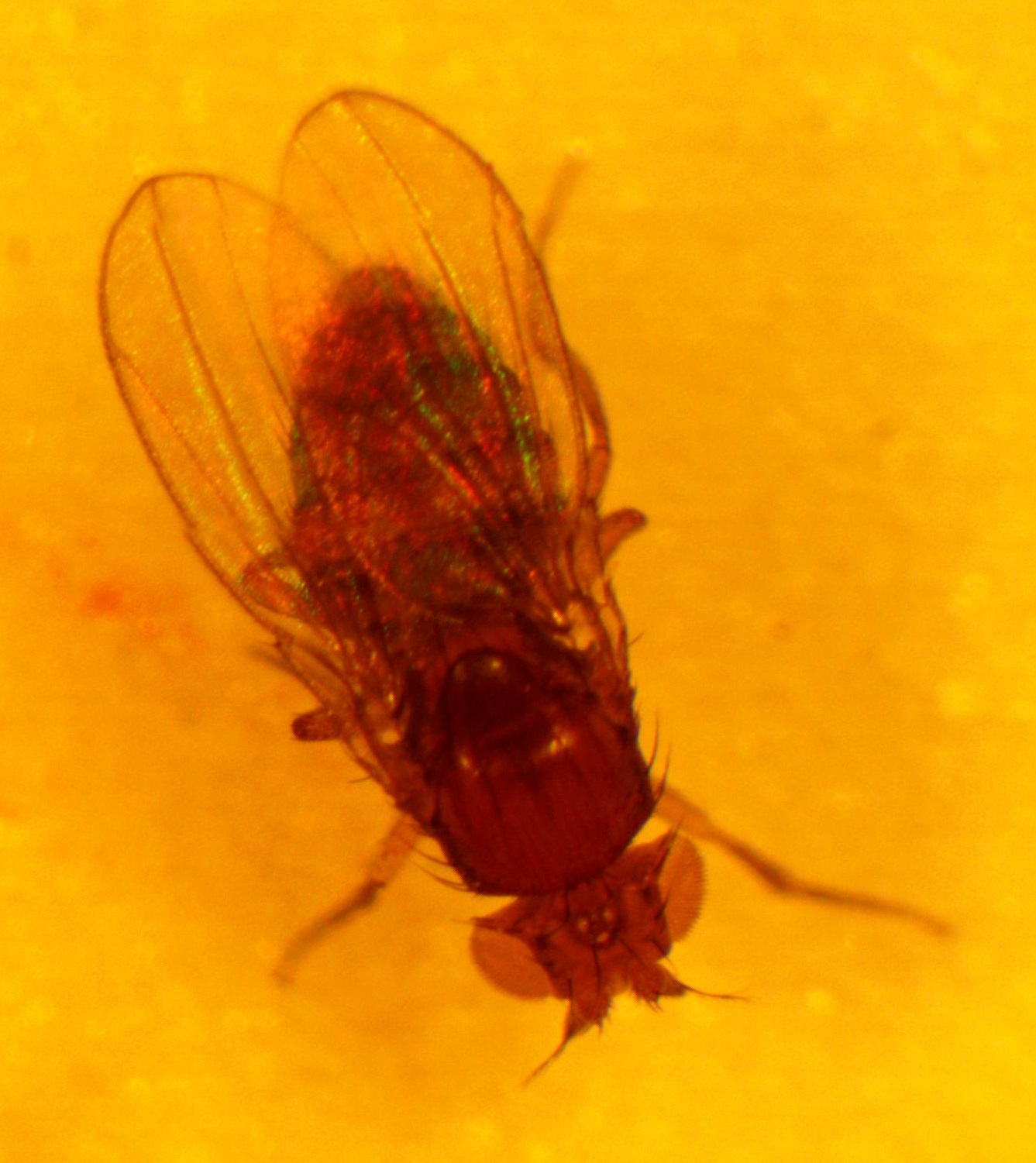 Above is a female that is starting to wake up and has stood up on her legs.  The big difference about this fly from the ones above is that she is a mutant and has white eyes (they look kind of reddish/yellow in these images on some displays but in real life they are indeed white).  Below is a male, also with white eyes. 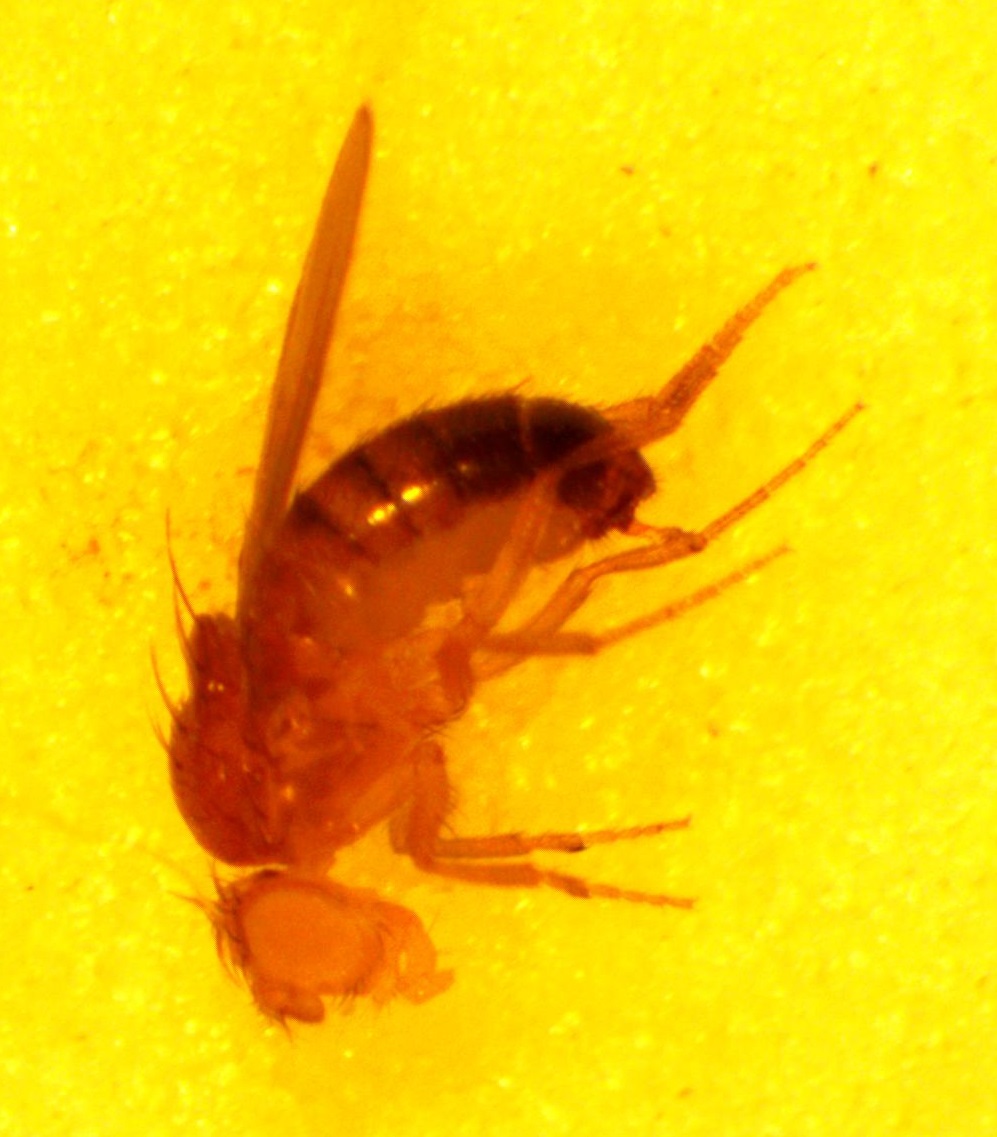 You can also just see the "sex combs" on the front legs.  The are a dark patch on the front of the leg midway up.  Only males have these but they can be hard to see when sorting large numbers of flies.  I've outlined them in the picture below.

The white eye color is due to a mutation at a gene called white (genes are named after mutant phenotypes) on the fruit fly's X-chromosome.  The symbol for white is w and this particular mutant is the first allele (mutant variation) found at white by Thomas Hunt Morgan and is written as w1.  These flies have been maintained by various labs over time and are direct descendants of the white mutants discovered by Morgan over a century ago, which he used to establish that genes were located on chromosomes by X-linked inheritance.

This also brings up another point.  The names of genes seems seem easy and obvious at first but at some point along the way you realize it is counter intuitive.  In classical genetics a gene was discovered when a mutation occurred.  More often than not mutations inactivate a genes normal function to some degree.  So genes are named for the opposite of what they normally do.  When the white gene is functioning the flies have red eyes; when it is inactivated they have white eyes.  Using the car analogy again, if we named parts of cars in the same way the brake pedal would be called something like stopless and the gas pedal would be unmoved.  So in a normally functioning car you would activate unmoved to go faster and stopless to slow down, which seems intuitively backwards based on the names.