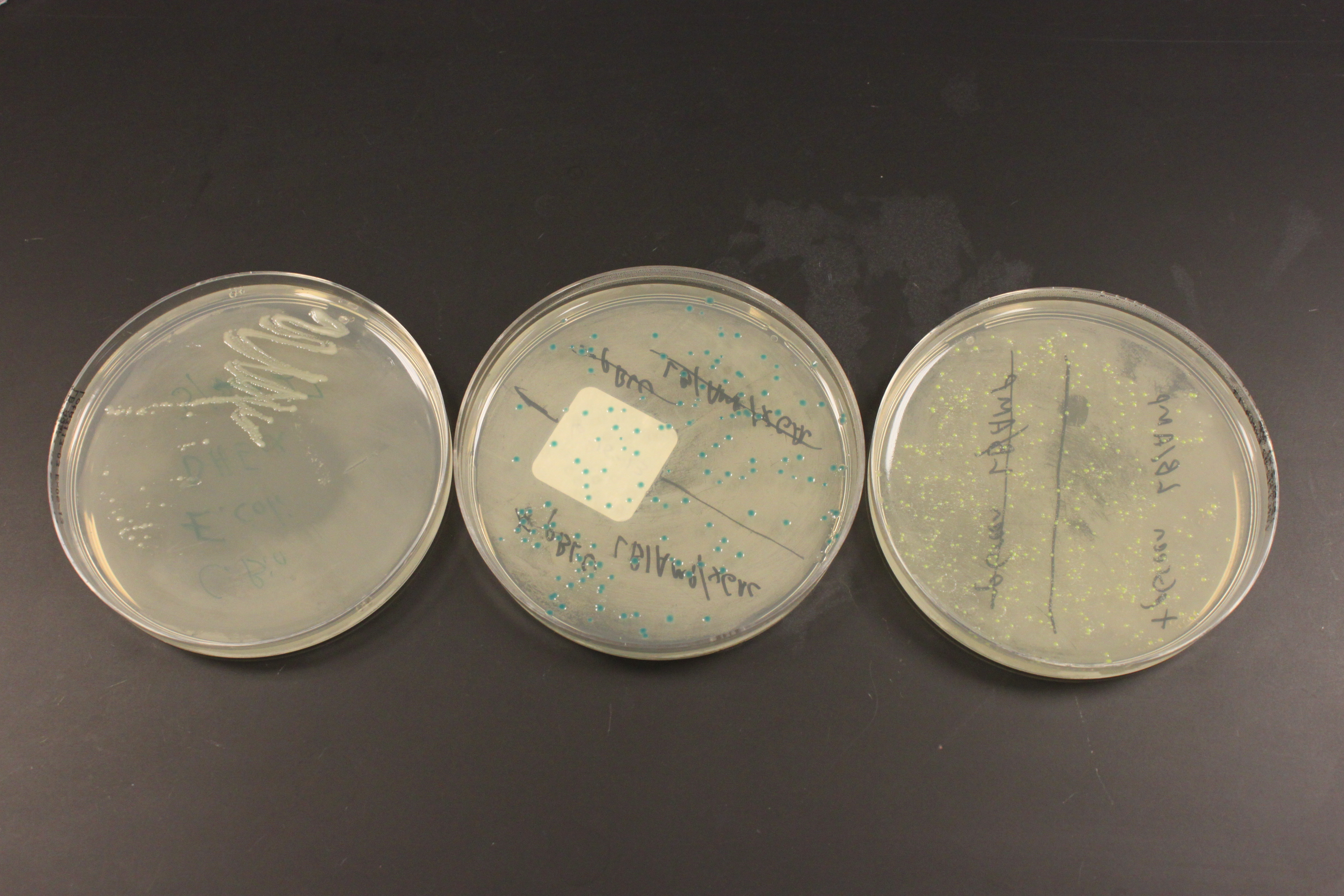 Above are three plates of media with E. coli bacteria growing on them at 37 C overnight.  This is a different strain of E. coli called DH5alpha (I used MM294 earlier) but neither one has antibiotic resistance.  In the left plate, without antibiotic, I "streaked" out cells by running a sterile wire loop back and fourth through the cells repeatedly, making a dilution until I could pick a single clone colony of rapidly growing cells.  I then transformed the cells using heat shock.  The plate on the right is expressing GFP (as part of a fusion protein with lacZ) that gives them a green color that I mentioned in an earlier post.  The plate in the middle shows colonies that are dark blue, they are expressing a fully functional lacZ gene and have X-gal added to their media.  Chemically X-gal "looks" like a disaccharide (a "double" sugar molecule made of two simple sugars).  lacZ normally cuts disaccharides to make monosaccharides for the cell to use, however when X-gal is cut a molecule containing bromine is formed that spontaneously forms a new molecule with itself and gives the cells the dark blue color.

In the close up image above you can see smaller "satellite" colonies around the GFP transformed cells.  In these plates ampicillin is used to select for only the cells that have taken up the plasmid, which contains an amp-resistance gene.  However, the enzyme produced destroys ampicillin in the media around the cells, which allows cells that were not transformed to start growing.  You have to be careful not to pick the nearby untransformed colonies when attempting to clone a DNA sequence in a plasmid.

I tried looking at the GFP expressing cells under UV light in a dark room and I could not see them glowing.  So I put the plates in a transilluminator we use to take pictures of gels.  It uses UV light and the camera can be set for a long exposure. 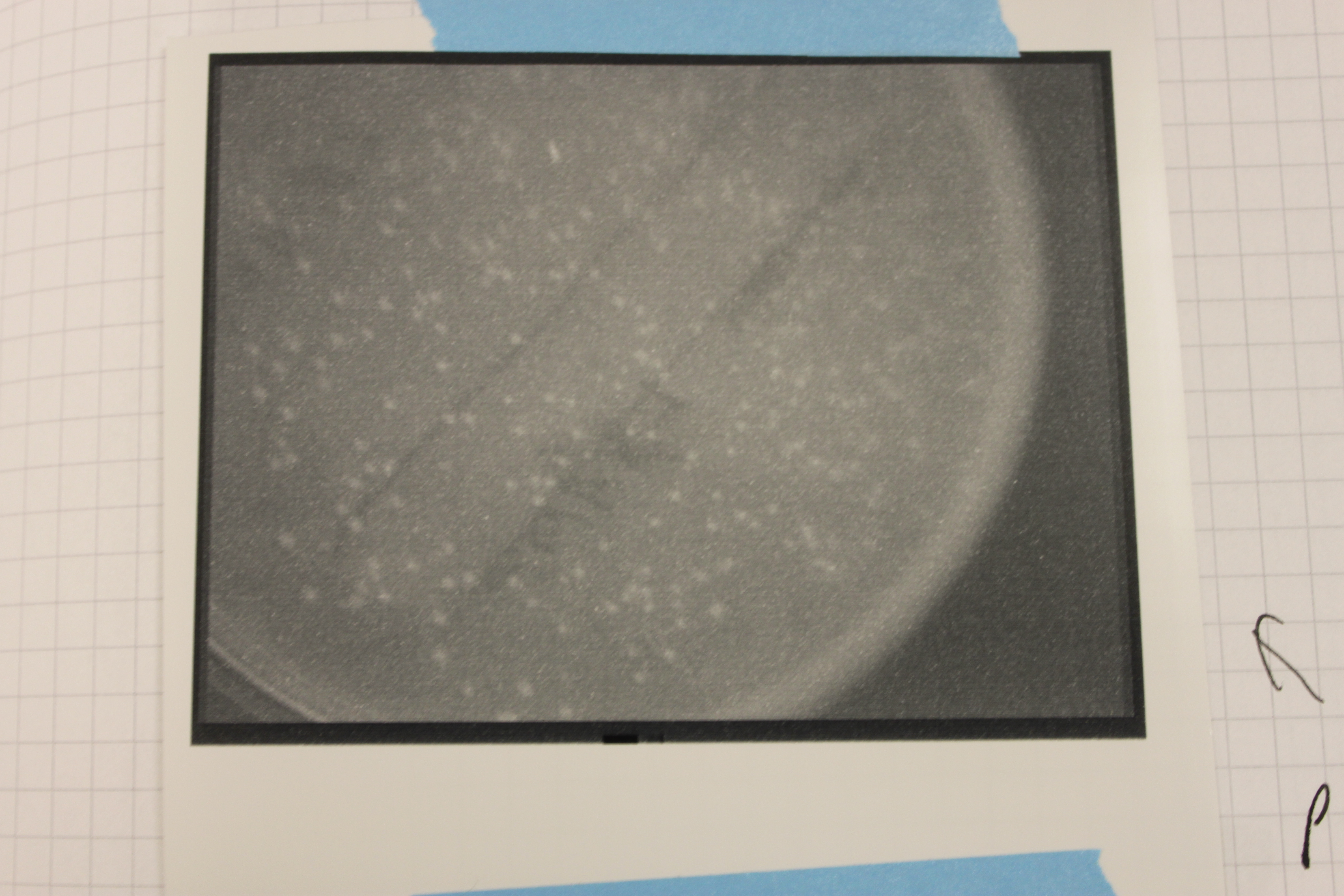 Above is the image from the UV transilluminator.  You can see bright spots where the colonies are growing, but is this GFP?

I put some other plates in for comparison. 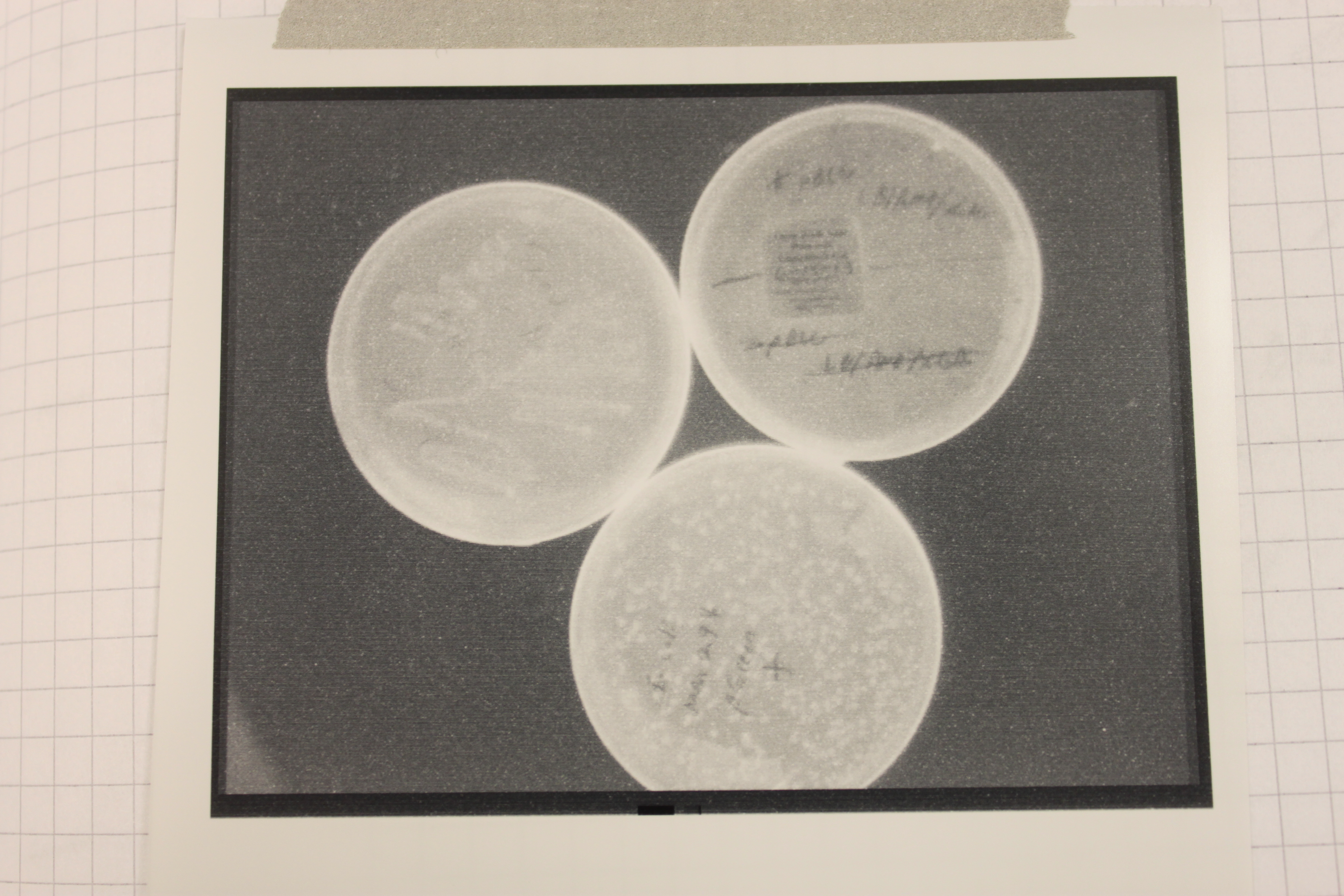 On the bottom is the GFP expressing plate, on the upper right are the lacZ colonies, and one the upper left are untransformed colonies I streaked out.  The lacZ expressing cells are darker, but this could be because of the blue dye from Xgal.  The regular cells seem bright, perhaps from auto-fluorescence, which does not make the GFP cells very convincing in terms of fluorescence.

I am going to try some more variations.  Part of the reason I am doing this is to get a bacterial transfromation/cloning system up and running in the lab, another part is to find a nice system, or set of systems, for teaching a genetics lab in the fall.

One thought on “More Transformations, pBLU and pGreen”